It has been a very long time since I did a Blog Post.  I tend to just use Facebook these days for all my work.  However there are times, like this, when nothing but a blog post will do! 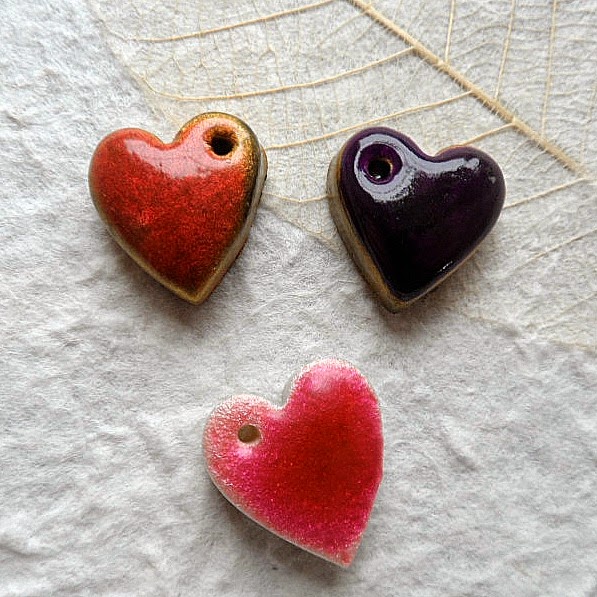 I decided to have a play today.  I have had some Fimo Liquid Gel kicking around in my supplies drawer for ages and have never used it.  It was one of those things that I saw in my favourite Polymer Clay Shop, Clayaround, and somehow it just ended up in my basket!  I am sure the same thing has happened to you!

Whilst flicking through FB yesterday I stumbled upon a free tutorial, by a Russian Lady, and it looked like a lot of fun.  A little bit of playing with Google Translate and I thought I had the gist of it.

Unfortunately there was one vital ingredient that I do not possess.  Resin.  I have always wanted to have a go with Resin, but the mixing, and the waiting for it to set, I know, would be my downfall - I never was the most patient of people, so I have never bought any.

Not to be deterred, I decided to try it anyway and would just give the beads a couple of coats of glaze instead.....!

Unfortunately this really was not a good idea.  It turns out that the Gel is very flexible when baked, which I am sure is brilliant for some applications, but for beads that will obviously have a fair bit of wear and tear - it was just not strong enough.

These are the first leaves I made.  I sort of followed the tutorial, but really just used it as a guideline.  The colours are gorgeous, but I wanted a clearer finish, so I sanded with about 6 different grits of sandpaper, but it seemed to make things worse.  The instructions on the Gel bottle said that you can wet sand, however I used my Micro Mesh - so maybe this is where I went wrong!

I then decided to add the glaze to see if that worked.  It really did clarify the translucence, however I then thought that it would be a good idea to add a second coat of glaze.  Did I mention that patience was not a strong point of mine?  Ah...yes..well, it seems as though the first coat may not have been completely dry.......!  So the finish became streaked with brush strokes.  Not my finest hour!

However, all is not lost I thought!  At least I know that if I am patient, a second coat of glaze will look great!  Before I spent another 4 hours making some more beads however, I had to try the ultimate test and see if I could mark the coatings in any way.  As you can see, my thumbnail indentation is very clear!  Oh well.  It was obviously not to be, at least not without a lovely finish of resin!

So lots of lessons learnt and lots of experimentation, which is always a good thing.  It has been ages since I just played for the sake of playing and I think it is something I should do more often.

I now have something else new in the oven, we shall see if this experiment turns out any better!!

Just checking if comments are working - this is a test!

Love the colors of the liquid polymer clay. And the leaves are beautiful. So sorry it didn't work with the glaze, otherwise these would have been perfect

Those colors are gorgeous! Time to check out resin. Just add it right before you go to bed and let it sit overnight.

thanks for this post. This post makes a great point about focusing your efforts.
magento development company in London

Nice post, Thanks for your very useful Information, I will bookmark for next reference

I like your blog & designing
India Times Shopping Coupon

Thanks for all your efforts that you have put in this .very interesting information.i would like to do all the information
abhibus coupon

Thanks for Sharing That... Sucses for You

I really like your post.Great amazing things here. I am very satisfied to see your post. Thanks so much and i'm

Quick Shortcut Maker app can create a shortcut to an application from the list of activities which are installed on your phone. Even if so many applications are installed, you can choose an activity smoothly.

As a computer system individual, our requirement for an assistant software remains to expand. The years different firms have actually established a range of software in order to help You. They are rather charitable due to the fact that it provides at no cost (or component of the "trial-version") as well as You could absorb the location download free software.

While searching on Dating I found your blog, there are some good posts here and I�ll be checking back this article

superb post. Ne?er knew this, appreciate it for letting me know. check out the post right here

another hot day in the sunshine house on appleton drive ..|janedoeeUHHH| advice

Come find the best workout supplements at the cheapest prices online. Get ready for those muscle and strength gains you have been looking for. look at this web-site

thanks for sharing, keep up the good work:

Amazing...I love this I want to gift this to my wife on our anniversary. Can you suggest more?


this was a really nice post. Spending some time and actual effort to create a superb article I want to suggest you some interesting things or tips click here

Amazing blog. Your blog helped me to improve myself in many ways thanks for sharing this kind of wonderful informative blogs in live. I have bookmarked more blog from this website. If nothing helps you resolve the issue, don’t worry. You can contact the HP smart printer setup who are available 24x7 to help solve your problems remotely. You can tell them your HP printer bugs, and get a solution quickly.

I have read all the comments and suggestions posted by the visitors for this blog are very fine,We will wait for your next blog so only. Thanks! Want to explore more about My roku activation code? We have dedicated team of experienced Roku Professionals to help people with all possible Roku device related queries.

Pips
Bath, United Kingdom
Addiction. Not a word I ever thought I would use in a description of myself! But here I am, addicted to the stuff and loving every minute! Come and share with me the up and downs and ins and outs of trying to be a Polymer Clay Artist. It's a journey I started a little while ago now, but could do with some company on the way - walk awhile with me. Thanks.